Science, Technology and Society in the Light of Niels Bohr's Thoughts

The University of Copenhagen gathered international researchers and decision-makers to explore how open access to information and scientific cooperation can help us manage global problems. The conference focused on contemporary challenges in bioethics, economics, politics, climate, warfare and information technology. 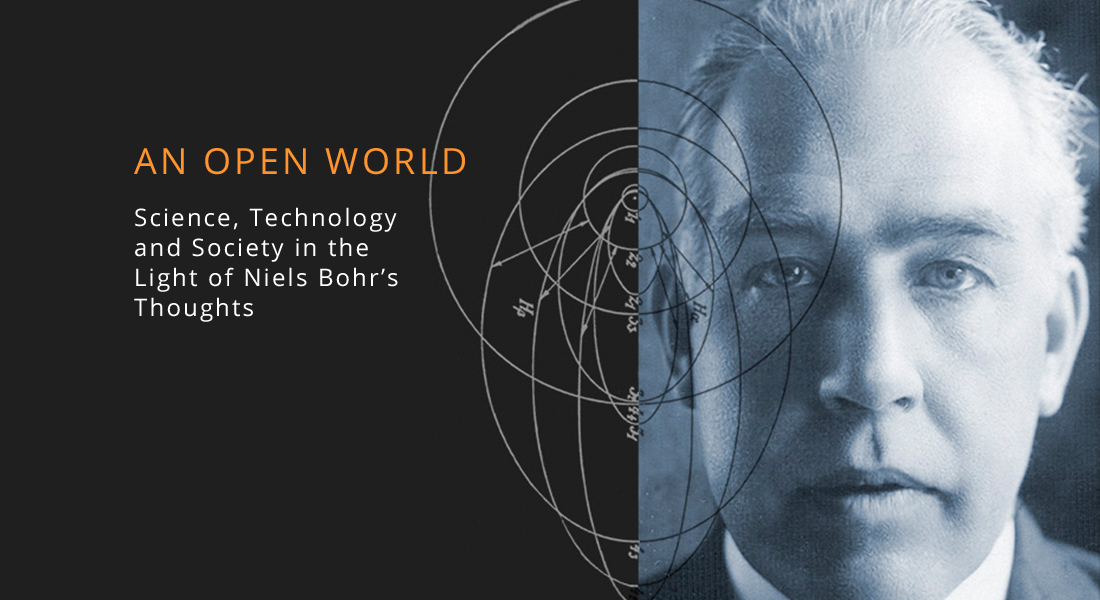 The live stream and the conference has ended, but we hope that you will continue to attend our website, participate with your thoughts on openness at theopenopenletter.org and tweet: #anopenworld

See you at the next Open World conferences.

We are still trying to get the final version of the new open letter to the people of the world published in a high-ranking journal. This will determine when we will be able to upload it on the website.

In the 1940s and 1950s the physicist Niels Bohr dedicated his work increasingly to the idea of an open world as a necessary response to the new challenge confronting the world: nuclear weapons. The solution to today's challenges is hardly identical to the one proposed by Bohr, but they are of a magnitude that require Bohrian thought. The conference was organized under four headings that frame the contemporary challenges in the relationship between science, technology and society:

At times, breakthroughs in science and technology are of such a radical nature that our usual manner of dealing with issues fails politically and new principles and procedures have to be devised. In his time, Bohr cut to the bone of the political implications of nuclear technology.

What can we infer today about the political implications in our society of contemporary and future science and technology? In the military domain, nuclear proliferation is not supplemented by revolutionary developments in space weapons, drones and cyber war.

Transformations in domains like climate change, energy, health, and biotechnology challenge existing political and institutional structures, and scholarly insight into the nature of new sciences and technologies should inform discussions of new principles of organization and governance. Imminent scientific breakthroughs need to be thought through to their radical implications, nut assimilated into procedures that no longer fit.

Niels Bohr suggested openness as a solution to the problems of his time. Whereas his idea was then mostly a radical vision, technologies like the internet have since provided unprecedented forms of openness.

New technology indeed did unleash productive powers through openness that have allowed mankind to handle many of the new challenges and risks; but the openness we have seen, most clearly with the internet, is not to be taken for granted.

Economic, legal, political and technological decisions that currently threaten or limit the potential of openness especially in the realms of science and technology.  Also, potential dangers and dilemmas of unlimited openness will be addressed.

Today single individuals can’t meaningfully write open letters to the UN, but decision makers need to be informed by cutting edge scientists about the implications of scientific developments, and scientists face difficult dilemmas in relation to both the social implications of their science and their public responsibility.

Institutions and procedures need to be adopted or invented in different domains, but also general understandings of science might need rethinking - among policy maker, the public as well as scientists themselves.

The first keynote was delivered by historian Richard Rhodes, whose four volume nuclear history, launched in 1986 with the Pulitzer Prize-winning ‘The Making of the Atomic Bomb’, contains the finest analysis of Bohr’s initiative and the lessons to be learned from its fate.

Aptly, the first speaker after this, was the secretary general of IAEA, the International Atomic Energy Agency, Yukiya Amano, thus continuing immediately with the state of nuclear questions today.

The Final Plenary and the New Open Letter

After having discussed the four headings in the plenary as well as in the parallel session, the main findings were summed up by the parallel session chairs. In addition The New Open Letter was presented, and a high-profile roundtable discussed it all. Closing comments were made by representatives of the governments of Denmark and Brazil. The latter of whom was be the host of the next ‘Open World’ conference in 2016.

In a special session during the conference, three UNESCO Niels Bohr Gold Medals was awarded. Princess Marie of Denmark and UNESCO Director General Irina Bokova presented these medals to distinguished scholars, who gave lectures and was jointly interviewed by the recognized science journalist Ranga Yogeshwar in a special segment of the conference.

The idea behind the conference

When Niels Bohr was first informed in early October 1943 about the state of the British-American nuclear weapons project, he became immediately at least as concerned about the long-term political consequences as about the immediate scientific insights and challenges. At the same time as he contributed to the realization of the project, he made a number of diplomatic approaches in the US and England primarily in order to convince the British and American statesmen to inform the Russian allies about the nuclear weapons project, and, more generally, to encourage a serious consideration by the politicians of the new weapon’s post-war role. After the war he intensified his activities and spent significant energy and thought on this political project, an activity that culminated in an open letter to the UN in 1950.

Today society and international politics are affected even more strongly by science and technology, but we lack a serious discussion of how to handle this dramatic process of constant change. The discussion is complicated in particular by an increased scientific specialization, as a result of which few people feel adequately equipped for discussing across disciplines and functions. In this situation, basing a large conference on the “invocation” of Niels Bohr – whose interests and activities to an extreme degree ranged from basic scientific research to philosophy, arts and social commitment – is particularly fitting.

Niels Bohr immediately understood how a nuclear race between competitive and secretive research communities and fear of new technological breakthroughs would shape relations between the great powers. However, just as importantly, he thought at the same time that the new technology also entailed the opposite: the solution. Openness – an open world – constituted a positive lesson of nuclear weapons. This view involves a strong element of transferring to political relations the approach that ideally, and according to its self-image, marks the scientific world in general, and Bohr’s environment at the institute in Copenhagen in particular. In the research community the self-understanding is that ideas are available to all – and success is to have one’s ideas spread and used by as many as possible. From its establishment in 1921, Niels Bohr’s institute was regarded as a particularly successful case, where this spirit was carried out across nationalities, professional specialization and, not least, beyond the natural inclination of researchers toward reservation regarding their own early ideas.

Social science research on nuclear strategy confirms the views of Bohr, and disagree with those of the otherwise military-history informed Churchill, in that the former claimed that nuclear weapons made a qualitative and dramatic difference. Bohr warned that nuclear weapons would change the character of great power relations fundamentally. Churchill rejected this, saying that ‘this new bomb is just going to be bigger than our present bombs and involves no difference in the principles of war’. Bohr was proven right; nuclear war would certainly not follow classical principles of war, and without nuclear weapons, East-West relations and thereby ultimately domestic societies had unfolded very differently.

Our present challenge is to examine how scientific advances create new changes of a similarly qualitative kind. Areas such as climate change, genetic engineering and militarization of space not only produce differences in degree but have the potential principally and dramatically to change society – including how research and knowledge should be organized, distributed and managed. Bohr thought that science and the resulting nuclear weapons required changes to the organization of international relations centred on openness especially regarding science and technology.

Robert Oppenheimer later said that Bohr’s way of thinking meant that ‘In principle, everything that might be a threat to the security of the world would have to be open to the world’. Today, as there is in fact great concern about many new types of threats to security as well as a rediscovery of the problem of nuclear weapons, a rethinking of Bohr’s “Open World” could be a way of looking both principally and practically-politically at the great contemporary challenges that have research and technology at their core.

The idea of the conference

In 2013 there will be a wide range of events commemorating the 100th anniversary of Niels Bohr's three epochal articles that most famously introduced the quantum-physical model of the atom. The University of Copenhagen celebrated this aspect of Bohr’s work through an initiative combining participants from both the scientific and political worlds. Rather than approaching this task historically, it was more interesting, relevant and Bohrian to examine how the idea of an open world can contribute to dealing with the challenges of today and what differences there may be between the technologies, the research and the political conditions then and now.

The conference may be seen as a continuation of two similar symposia at the University of Copenhagen respectively in 1985 and 1989 conceived and organized by then Rector Ove Nathan. These symposia resulted in the books ”The Challenge of Nuclear Armaments: Essays Dedicated to Niels Bohr and his Appeal for an Open World” and “The Challenge of an Open World: Essays Dedicated to Niels Bohr”. The first conference in particular played a significant role in the incipient relief of tensions between East and West, the change of military doctrine by the Soviet leadership and the realization of new thoughts on openness, Glasnost. The continuity of the substance of Bohr’s thoughts about nuclear weapons was more evident in the 1980s than it is now, but the idea of openness has on the other hand achieved wider resonance. The second conference initiated the task of rethinking new sciences and technologies in a similar manner, and this task has only become more pressing with time.

Photos from the conference's plenary sessions.

Biographies for speakers and chairs

The biographies for each speaker and chair can be accessed here.

Headings of the conference

The conference composed an unique interdisciplinary forum where a broad selection of academic papers were presented and discussed. The sessions were arranged under the five thematic headings of the conference: